Today we have the release day blitz for A.K. Evans upcoming romance, Desperate. Check it out and get your copy today!

Ekko Rose is no stranger to struggle. Even though she’s experienced more than her fair share of hardship, she has dreams she wants to fulfill. But when another stroke of bad luck leaves her homeless, Ekko's only option is to focus on survival.

Dominick ‘Dom’ Moore has had his eyes on Ekko ever since he saved her life several months ago. He kept his distance then because she was attached to another man. Now, seeing her living out of her car, Dom resolves to help her get back on her feet.

When Dom approaches Ekko, she wrestles with knowing her rightful place in the world and desperately wanting to latch onto something better.

Just as the pair fall hard for one another, Ekko’s streak of misfortune delivers one more blow. With their relationship thrown into a pit of despair and hopeless desire, Dom must crack the case he’s been trying to solve for weeks.

Because if he can’t, Ekko might be lost to him forever.

“You can’t sleep out here tonight.”

“Ekko, follow me and you can stay at my place as long as you need.”

She shook her head and vehemently refused. “I can’t do that. You’ve already been generous enough and you don’t even know me.”

I narrowed my eyes a bit before I teased, “I think I can protect myself if you try to harm me.”

She let out a laugh but quickly stopped herself. “That’s not what I meant.”

I barely heard her words because I was so intrigued by the sound of her laughter. It was captivating.

“I know,” I confessed. “I also know that you’ve fallen on some hard times and you need some help. There’s nothing wrong with that. I can help you.”

“I rescued you from an attempted abduction and we just had dessert together. You know I work for a private investigation company and that the local police know who I am because of the work I do. Do you really think I’d hurt you?”

She shook her head and responded, “No.”

“So you’ll stay with me then?”

“I don’t think I should.” She held firm in her decision.

“Fine,” I declared. “Then let me get you a hotel room for a few nights while you get your living arrangements sorted. There’s no deadline.”

“You would do that?”

There was no denying the surprise in her voice.

I grinned at her before I answered honestly, “Because you need help right now and I’ve got the means to give you that help.”

Her lips parted, and my eyes dropped to them.

“You’ve already given me so much,” she argued. “I can’t accept any more money from you.”

“Looks like you’re staying at my place then,” I noted as I crossed my arms over my chest and cocked an eyebrow. I couldn’t miss the heat that flashed in her eyes.

A moment later when I thought she was going to give in, she said, “I’ll get myself a hotel room.”

I held my hand out to her car door and said, “Lead the way.”

“I’m going to make sure you have a safe, clean place to stay tonight.”

She sighed and got in her car. Once she started it up, I got in my truck and followed her out of the lot. Not much later, I pulled in behind her at what had to be the dumpiest, most unsafe motel in the entire city.

I hopped out of the truck, marched up to her door, and opened it. “Not a chance in hell you’re staying here,” I warned her.

She looked at the motel and back at me. “Why not?”

“I’m not convinced they even have beds here. Besides, if you moved out of your boyfriend’s place because you don’t want to be around drugs, then you shouldn’t be staying here.”

“Dom, this is all I can afford,” she croaked.

I enunciated each word so she’d understand just how serious I was.

“I have no business being anywhere near someone like you.”

What the fuck did that mean?

“You’re going to make me say it out loud?” she worried.

Even though I had a feeling I knew what she was getting at, I returned, “Ekko, I have no idea what you are talking about. If you don’t want to tell me what that means then tell me that you’ll come with me back to my place where I’ll give you a safe, clean, comfortable place to stay for a few days while you get your stuff sorted.”

She closed her eyes and let out a sigh.

Finally, she gave in. “Alright, it’s not like my luck could possibly get any worse. If you kill me, you’ll really just be helping me out of a very difficult situation.”

“Nobody is killing you,” I asserted. 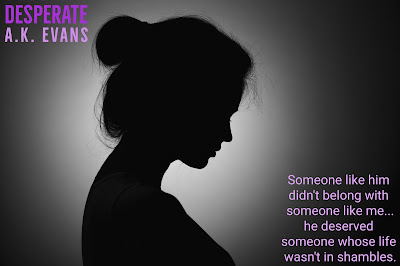 Check out the Trailer:

A.K. Evans is a married mother of two boys residing in a small town in northeastern Pennsylvania. After graduating from Lafayette College in 2004 with two degrees (one in English and one in Economics & Business), she pursued a career in the insurance and financial services industry. Not long after, Evans realized the career was not for her. She went on to manage her husband’s performance automotive business and drive the shop race cars for the next thirteen years. While the business afforded her freedoms she wouldn’t necessarily have had in a typical 9-5 job, after eleven years she was no longer receiving personal fulfillment from her chosen career path. Following many discussions, lots of thought, and tons of encouragement, Andrea decided to pursue her dream of becoming a writer.

Between her day job, writing, and homeschooling her two boys, Evans is left with very little free time. When she finds scraps of spare time, she enjoys reading, doing yoga, watching NY Rangers hockey, dancing, and vacationing with her family. Andrea, her husband, and her children are currently working on taking road trips to visit all 50 states (though, Alaska and Hawaii might require flights).