He is temptation. Forbidden fruit. A craving I can’t seem to resist.

I went after him in search of answers, certain he had blood on his hands. Now I’ve fallen prey to his seductive looks and commanding charisma.

I know he is a threat. He’s entwined in a dangerous world I don’t understand. But that doesn’t stop me from aching for his touch, for the taste of his wicked lips.

Before I can truly surrender to the fire smoldering between us, I need to know more. I have to see behind the doors he keeps firmly locked.

This book is very sexy, very dark, and very addictive! Contains consensual kink and a dark and dominant hero with a dangerous secret. This is a big story that can’t be told in only one book so there is a cliffhanger – but never fear, book two releases three weeks later. The release schedule is as follows:

Books in the House of Sin Series: 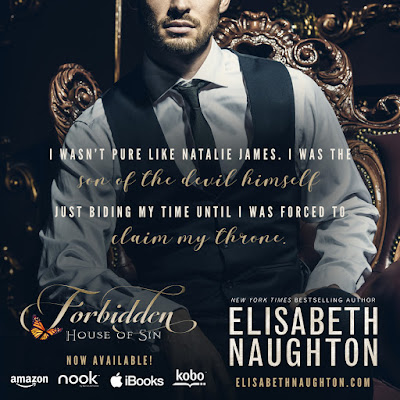 Natalie James is looking for answers.  She sucks the reader in as she tries to solve a mystery.  Luciano “Luc” Salvatici may be a man of power but he doesn’t appear to be happy.  He’s something of an enigma.  Gio Salvatici is a man with an agenda but does it involve Natalie?  Gio may not be a main character but he seems important to the plot.  Will be interesting to see if he appears in the next book of the series.

I felt that this book was just a tease for what is yet to come.  Because it’s a tease, I couldn’t turn away and certainly had no trouble turning the page.  I’m terrible at mysteries and Luc was the biggest one.  Even though we get his point of view, being told in the first person, I felt as if he was holding something back.  If he wasn’t going to tell Natalie, he wasn’t going to tell us.  There’s plenty of heat between our main characters but with everything left unsaid, what does that leave in store for us in the next book titled Deceived.  I certainly can’t wait to find out. 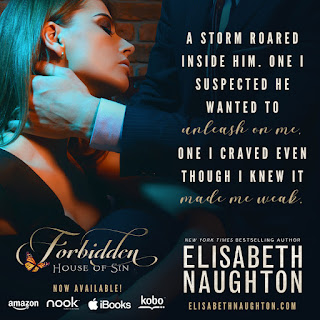 The force of his smile made him so devastatingly handsome, my irritation wobbled. But that word—kitten—set me on edge.
I didn’t like those cute little nicknames some men used. My stepfather called my mother princess, and I’d never liked it. Not because she didn’t deserve to be worshipped at that level by her spouse, but because he used it as a weapon against her. When he was happy with her he called her princess. When he wasn’t, he tossed out romantic terms of endearment like bitch and cunt.
Did I think Luc was like my controlling stepfather who had to know where my mother was at all times and who kept her isolated from her friends? I didn’t know. I didn’t want to think he could be like that, but the truth was, I honestly didn’t know that much about him aside from the fact he had a good heart buried beneath layers of something heavy and that he could make my body melt with just one touch.
Yes, he liked to be in control—he’d proved that last night when he’d told me to remove my dress and had commanded me to do things I hadn’t expected to want to do—but there was more to him than this façade of domination. I’d sensed it when I’d pulled him to me and kissed him last night. I’d seen it in the way he’d melted against me and gentled his touch. And I’d felt it when he’d slid deep inside me and we’d made love. Because that was exactly what we’d done. He hadn’t dominated me then. He hadn’t fucked me. He’d made love with me. Something he’d told me he never did.
“Something on your mind, gattina?”
I blinked, realizing I’d been staring at him, lost in thought. Lost in him. Shaking my head, I looked out the window. “No,” I lied. “I’m fine.”
But I wasn’t fine. My heart was racing and my mind was spinning because somewhere inside, I knew I liked both sides of him. I liked the tender lover who made my body tremble with one simple touch, but my body also craved the domineering man who could make me nearly come just by ordering me to my knees.
Elena’s words suddenly popped into my head. “It’s like I’m two people. The innocent model from Montana everyone knows by day, and the seductive bad girl at night who says ‘yes, sir’ and is willing to do anything he commands.”
My stomach pitched, and I felt the blood drain from my face.
I wasn’t becoming Elena…was I?” 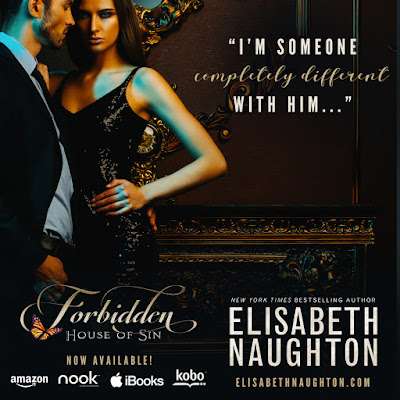 Before topping multiple bestseller lists—including those of the New York Times, USA Today, and the Wall Street Journal—award winning author Elisabeth Naughton taught middle school science. A voracious reader, she soon discovered she had a knack for creating stories with a chemistry of their own. The spark turned into a flame, and Elisabeth now writes full-time.

Elisabeth has penned over thirty books and continues to write in multiple genres. Her books have been translated into numerous languages and have earned several award nominations, including three prestigious RITA® nominations from Romance Writers of America. In 2017, REPRESSED, the first book in her Deadly Secrets series, won the RITA® for best romantic suspense.

Her work has been praised by the Chicago Tribune as being filled with “deadly intrigue, high adrenaline action, and scorchingly hot passion.” Kirkus calls her “a writer talented enough at weaving a yarn to get her readers ensnared in it.” When not dreaming up new stories, Elisabeth can be found spending time with her husband and three children in their western Oregon home, wrangling two needy cats, or chasing after one very rambunctious Dalmatian.