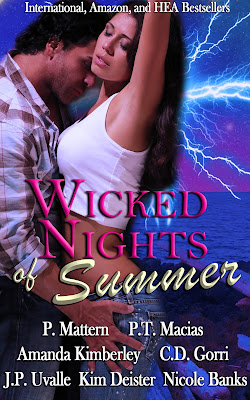 Summer reading just got hotter with the Wicked Nights of Summer anthology!

7 Brand New PNR Tales to heat up your summer!

All other book sites: 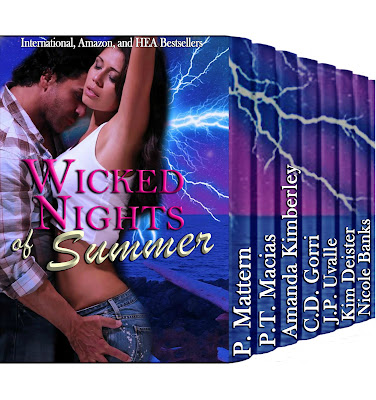 Summer reading just got hotter with the Wicked Nights of Summer anthology! This collection of paranormal romance stories is filled with sexy heroes and hellacious heroines in a tropical setting!

Dive into romance with this sizzling boxed set that is guaranteed to set your summer on fire! Get ready to heat things up with Vampires, Shifters, Angels, Mermaids, Hunters, and more in this sensual boxed set!

*All proceeds go to StandUp For Kids Charity Organization! 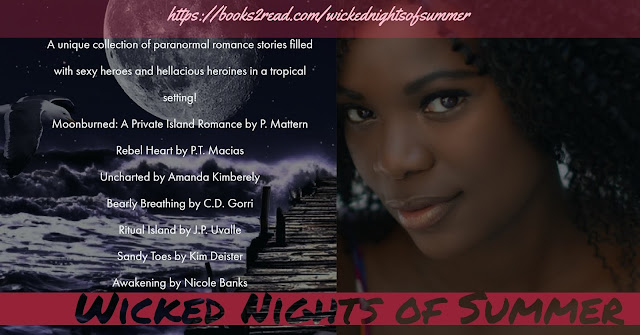 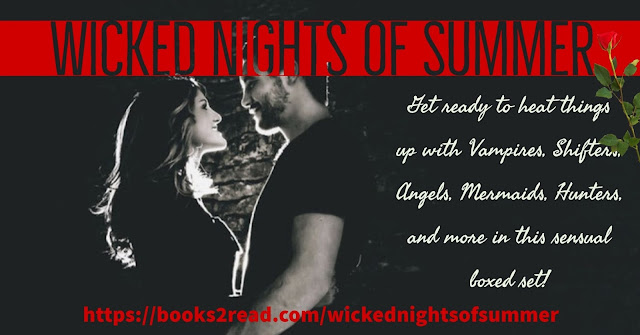 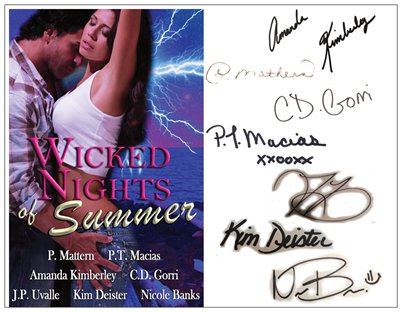 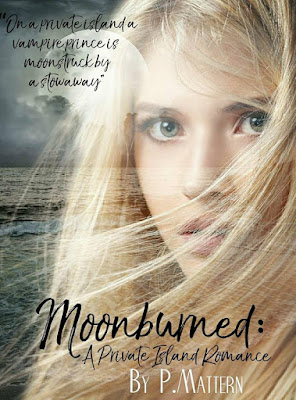 On a private island, a Vampire is moonstruck by a stowaway.

Valerian Smith is a globetrotting vampire and the head of an international corporation. Caddie Tinsley is a recently homeless aspiring actress who seizes an opportunity to stowaway on his private jet. When Caddie is discovered, Valerian is convinced she is a corporate spy and determines not to release her. In his mind he has two options: kill her by draining her of blood, or keep her as a slave on his private island. He has no idea that the scrappy little blonde with excellent tits and impossible hair will end up capturing a heart he didn’t know he possessed. 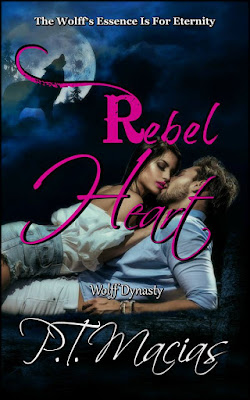 Baxter hates his new duty, to watch Shasi for the Destroyer. His Wolff needs to claim her drives him insane, even though she’s a Rakshasi demon that shapeshifts. Who’s going to guard his rebellious heart?

Baxter Mackenzie, the influential and commendable supernatural attorney, is charged with protecting the powerful Rakshasi demon shapeshifter, and one that can shift into any creature she wants. Baxter doesn’t have time to babysit, and especially a shifter that looks so damn sexy as a human, disrupting his world. Who’s going to protect his rebellious heart? Restraining in his Wolff is no easy chore. The Rakshasi demon is Apollyon’s, the supreme destroyer, protégé. Shasi has contently lived in the deep dark Citadel assisting her master. Now, her soul wants Baxter, but could she claim him? 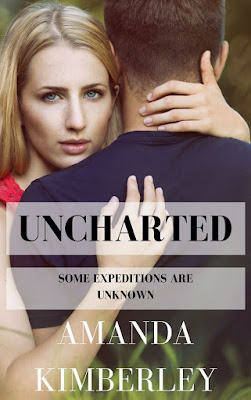 Some Expeditions are Unknown.

Blurb: Genevieve’s life as a hunter was simple. Vanquish every monster, even if that monster turns out to be someone you dated. An escape from her former life with a werewolf was just what she needed when her bestie Carina booked a trip for the two to the Loften Islands. But when she met Gunnar, a high powered leader of a vampire coven in Norway, she found herself falling into uncharted waters. 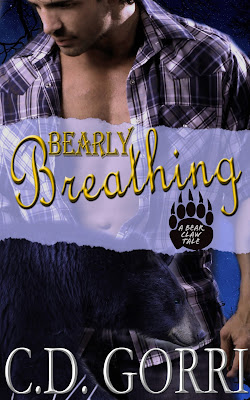 He’s looking for his mate. She just wants to have fun. Will Leya and Marcus find their destiny one hot summer night?

Sweet and curvy, Leya Tremayne is tired of being a shoulder to cry on for the men in her life. Determined to shed her image, she goes on a tropical vacation with plans to let her hair down! She meets Marcus Devlin and is instantly attracted to the devastatingly handsome stranger. He is exactly the type of man she needs to help her build her new image! Can she handle a one night stand with this rugged Bear Shifter or will she lose her heart in the process?
Marcus Devlin is looking for his true mate. After months of searching, he is just about ready to give up when destiny lands in his lap. Literally. After rescuing the beautiful blonde tourist from an untimely accident, Marcus knows instinctively that she’s the one. He just has to convince her! 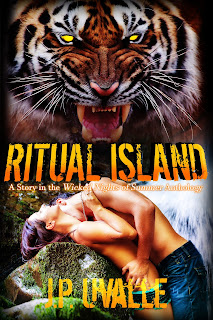 I’ve Broken the Most Important Rule of Being a Shifter King—Never Fall in Love with the Sacrifice.

Blaire and her best friend Melanie win the vacation of a lifetime—an all-inclusive cruise to Bora Bora. Once aboard, the girls start to notice it's not your ordinary luxury cruise line. Something more sinister is at work. They are surrounded by shifters with insatiable appetites, leaving the girls to question how badly they want to remain aboard ship.
Life as a shifter king has its perks, but when King Dorian encounters his latest sacrifice, he is left to question what he can't live without. Will the shifter king risk everything for love or will he restore his supernatural powers and continue to reign over Ritual Island? 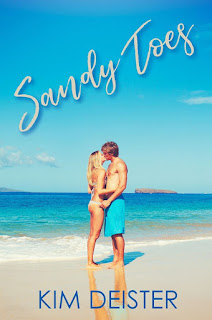 Two lives turned upside down. Two big secrets. One steamy vacation in the Hawaiian islands. Will Ireland and Sully find what they want most in each other?

Ireland needed a break. It had been a rough year and she needed a fresh start. Her coven was embroiled in a civil war and when she refused to fall in line with the rest of them, she was kicked to the curb. By her friends, by her family, even by her boyfriend. She'd moved past the grief stage, even past the anger stage. For the first time in her life, she was free to do what she wanted. She had no one's expectations to fill but her own. So, she decided to celebrate. She bought herself a three-week vacation to Hawaii. No responsibilities. Just fun in the sun and time to figure out what was next for her.
When Sully brought home two tickets to Hawaii, he thought Kallie would be thrilled. He'd envisioned three idyllic weeks on a tropical island. Swimming in the ocean, laying on the beach, catching a few waves, and eating in world class restaurants. But within an hour, he found himself holding an extra ticket as he watched Kallie put the last of her bags in another man's truck. He'd torn up that ticket and flushed the pieces down the toilet. But he still had every intention of using that other ticket. Maybe some time alone was exactly what he needed. 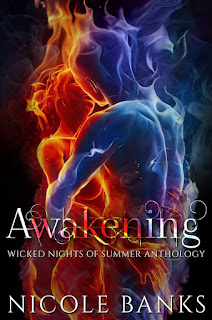 Both dead on the inside, until a spark ignited a fire they couldn’t outrun. Will they be able to withstand the heat or will they get burned by their flames?

The most sought after hired gun. She’s ruthless, but even killers need a vacation. He’s being hunted and there’s only one warrior strong enough to keep him alive. A king whose seeking protection and a killer searching for peace, but in each other they find so much more. When survival instincts kick in, so do their primitive instincts. This summer won’t be the only thing heating up. 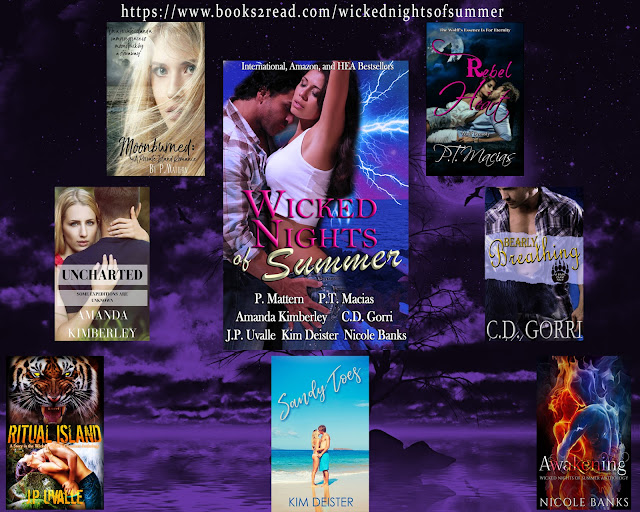