Jorinda Pearce thought she did everything right – graduated from college, married her long-time sweetheart, established a career. But what does she have to show for it now? A degree she doesn’t use, a job she hates, and an ex-husband that broke her heart.

Looking for a long overdue adventure, Jorie takes a walk on the wild side and attends a masquerade event at The Wicked Horse Vegas. It’s exactly the escape she’s looking for, and even better, she can explore anonymously. Drawn to the man masked in black leather with the body of a god, Jorie finds the greatest pleasures of her life at the hands of a stranger.

Walsh Brooks is the most sought after man in The Wicked Horse. Sex is nothing but a game to him and he’s the type that will always leave at the end of the night without looking back. Unfortunately for Walsh, there’s no way he can walk away from the mysterious green-eyed beauty behind the mask of sapphire feathers, because he knows exactly who she is.

Jorie is his best friend’s little sister and there’s not another woman in the world that’s more off limits. 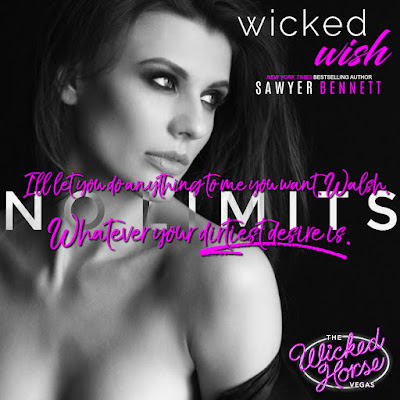 Our author has written a forward that I found enlightening.  I’m not going to say anymore on the subject because it’s something you need to read for yourself.  It’s a personal message to each reader that opens this book.  The only thing I will say is that I don’t like someone reading over my shoulder because it takes away from my enjoyment of the book.

Walsh Brooks lets us know right from the beginning what he likes.  He’s not trying to convert you but let you know what makes sex enjoyable for him.  Jorie Pearce wants to get on with her life and her friend has the best solution.  Elena is such a great friend.  She’s just what we need for a little comic relief.

There was one scene where I wondered if this was a game of Truth or Dare.  Then I began to wonder who was going to win.  Felt as if this was an interesting take on what happens between childhood friends.  Especially when one of them is friends with your brother.  Thinking back to my own brother’s friends – never happening.  And there are times when brothers can be jerks.

This author knows how to write some really hot and sexually charged stories.  It’s highly erotic but when you think about the club that Walsh belongs to that should be no surprise.  What I liked about Jorie is that she doesn’t let what happened to her stop her from trying to reinvent herself.  Walsh at times seemed a little full of himself.  Yes he’s a self-made man but it felt as if he felt entitled to how he treats the women of the club.  That is until Jorie reenters his life.  I keep my feelings about him up in the air until he finally redeems himself at the end.  And I was very happy to see that my wait for the next book in the series is short.

Squaring my shoulders, I march into The Royale and head straight for the concierge desk. I haven’t been in this casino before. Hell, I haven’t been in hardly any of them. Sure, I’d only grown up about forty-five minutes away, but gambling and all-you-can-eat buffets held no interest to me.

From Micah bragging about his best friend over the years, I knew Walsh orchestrated the purchase of the land, then pulled together financing with two other partners to build this casino. It’s one of the most popular on the strip, boasting five-star dining, old-world elegance, and superior customer service. Again, all this from Micah, but honestly… I’m so proud of Walsh, too. We may have lost touch over the years, but I’ll never forget all the ways in which he acted as a big brother to me.

Okay… that’s gross. Thinking of Walsh like a brother.

I scrub my mind clean of that thought and demand myself never to do that again.

Rather, I’ll never forget all the ways in which Walsh provided me friendship and support in my formative years.

“Can I help you?” a man behind the concierge desk asks with a genuine and friendly smile. Not snooty as I would expect in a fancy hotel, and I guess that goes to the superior customer service The Royale strives for.

“Yes… hi,” I say as I nervously tuck my hair behind my ears on both sides. “I need to see Mr. Brooks. How do I go about getting access to his apartment?”

Micah told me some time ago that Walsh lives here.

The concierge never loses his friendly smile, but a single eyebrow arches high at my temerity.

“Oh, gosh,” I stammer. “That came out stalkerish. Mr. Brooks… I mean, Walsh… and I are longtime friends. He used to babysit me.”

“Your name?” the man asks as he pulls up something on his computer.

After a moment of scanning, he looks up at me. “Your name isn’t on the approved list.”

“Well, he’s not exactly expecting me.”

“I’m sorry, Miss Pearce,” he says with true regret in his voice. “But our policy is strict. No one gets up to the private penthouse without their name on the list.”

I lean on the desk with one elbow and lower my voice. “Just out of curiosity… are there any women on that list?”

The eyebrow shoots up again.

“No, wait,” I say hastily as I hold my palms toward him in a silent plea to not process my last request either mentally or on the computer. “That’s totally stalkerish, and I didn’t mean that.”

“Miss Pearce,” the concierge says, now with a hint of annoyance. “Perhaps you’d like to leave a message? I can get it up to Mr. Brooks today and he can call you.”

“No, I need to see him now,” I tell him firmly. “And I swear it’s not to cook a rabbit in a pot on his stove. Can you please just call up to his apartment?”

“Look,” I snap as I lean across the desk slightly. “I’m a lifelong friend of Walsh’s. My brother is his best friend. We lost touch for a few years, but we ran into each other last night. I really need to talk to him about something that happened last night, and I’m not leaving this hotel until you call up to his apartment.”

The eyebrow doesn’t arch but it does draw inward to meet its match on the other side as he considers what I just said.

“I swear to you,” and here I pause to look at his name tag, “Bentley. Please just call him. He won’t be mad.”

With a sigh, he relents and picks up the phone receiver, punching in a five-digit number. After a pause, he says, “Mr. Brooks… I’m very sorry to disturb you, sir, but there’s a Miss Jorie Pearce here to see you. She says she’s a longtime friend.”

I watch as Bentley listens, but I can’t gauge what’s being said as his face remains blank. Finally, he says, “Very good, sir.”

I take this to mean I’ll be getting an escort to the penthouse suite, but Bentley replaces the receiver and says, “I’m sorry, Miss Pearce. But Mr. Walsh told me to tell you he’s busy and can’t receive you right now.”

My eyes narrow at Bentley. “I don’t believe you. Call back and let me talk to him.”

“I assure you, I just talked to him and that’s what he said.”

“Call him back,” I order as I point to the phone.

Okay, that hits home. I don’t want to get anyone in trouble, so I say, “Fine. Give me just a moment.”

I take a few steps away from the concierge desk and pull my iPhone out. I shoot off a quick text to Micah. What’s Walsh’s phone number?

I wait a few moments, but I know Micah is awake in San Francisco at this hour. His phone is always on, and he never ignores a text from me.

He responds with the number before I can even start to tap my foot with impatience, adding on, Why?

I hate the lie, but I write back, Came to Vegas for the day. Thought I’d see if he could meet up for lunch. Haven’t seen him in years.

I roll my eyes as I text back, Real mature. Love ya. Later.

After I save the number to my contacts, I open a new text to Walsh. Let me up to see you or I’m going straight back to The Wicked Horse to satisfy some further curiosities I have.

I hit send and then walk back to the concierge desk. I merely lean one elbow on it and watch Bentley with a silent smile. The phone rings about ten seconds after that.

Bentley’s eyes fly to mine as he listens, and then says, “Yes, sir. Right away.”

When he replaces the receiver, he says, “I’m to show you to the penthouse elevator.”

“Thank you, Bentley,” I say brightly.

Since the release of her debut contemporary romance novel, Off Sides, in January 2013, Sawyer Bennett has released more than 30 books and has been featured on both the USA Today and New York Times bestseller lists on multiple occasions.

Sawyer likes her Bloody Marys strong, her martinis dirty, and her heroes a combination of the two. When not bringing fictional romance to life, Sawyer is a chauffeur, stylist, chef, maid, and personal assistant to a very active toddler, as well as full-time servant to two adorably naughty dogs. She believes in the good of others, and that a bad day can be cured with a great work-out, cake, or a combination of the two. 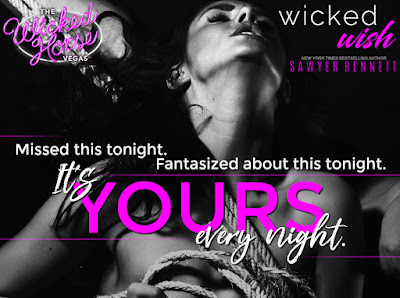