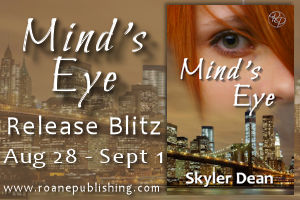 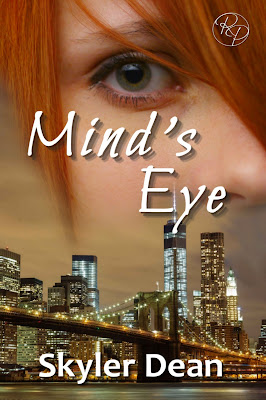 Newly hired NYC blogger Cassandra Hale has finally achieved her dream-living and writing in the big city.  Eager to prove her skills and secure her place, Cassie pushes hard to gain respect from the new age publishing group where she’s recently snagged a position.


As a sudden witness to murders in her sleep, Cassie becomes convinced that she’s losing her mind.
All she wants is to discover a way of making these gruesome visions stop. But with no control over them, her subconscious mind begins to wreak havoc on her life.


At the edge of her sanity, Cassie decides to take matters into her own hands and tracks down the latest victim from her dreams, subsequently gaining the unwanted attention from NYPD detective Derek Ward.
Struggling to cope, not only with accepting her newfound abilities but with her perceived involvement in a crime, Cassie is forced to contend with interrogations from Ward, who’s convinced she has something to hide.


As Cassie and Derek both fight to discover the truth, as well as a growing, unwanted attraction towards each other, they are ultimately thrown together as the stakes jump even higher-Cassie’s premonitions turn to a man whose diabolical intentions are eerily close to her.

The spacious expanse of hardwood shined against the low glow cast by the growing moon. Despite the icy air, the window had been boldly left open, sending the filmy cream curtains fluttering eerily against the washed glass.

She moved through the palatial home, silent as a ghost. Extravagantly decorated, overly lavish with marble gleaming and crystal dripping. Cassie could hear no sound, see no movement. But that didn’t stop the fear.

As she looked across at the illuminated floor, she saw tiny drops scattered over the wood, shimmering red against the monochromatic glow of the night. She followed them into the bedroom where the trail of drops turned to puddles. Crouching down, Cassie tried to touch a finger to the wet but she couldn’t make contact, her body light as the air and just as elusive.

A gust of wind swept through the room, blasting out angry bursts of cold. Still kneeling, Cassie realized she was at the foot of a huge four poster bed. The duster and comforter pillowed out around the carved wood panels, creating voluminous puffs of shimmering trimmed satin.

She felt herself move in slow motion as she lifted her gaze up the nearest bed post. Slowly she reached forward, following the red splatters, tracing her invisible fingers alongside their path.

Rising up, over the wood and satin, the red puddles led her to the dead.

Long thin limbs lay sprawled across the bed, delicate bare feet turned under. The woman, raven haired and beautiful even in death, was stretched on her stomach with her head cocked unnaturally to one side. Her mouth slacked open and her eyes were dark and blank as a doll’s.

Cassie saw that her shoulder had been wrenched back, the bone protruding up at an odd angle. The blood that had dripped and pooled across the floor was smeared over her arm to her wrist where she had been shackled to one of the bed posts. And in the center of her back, the pool swallowed her, covering her torso in heavy crimson.

Panting now, her breath gasping out, Cassie whipped her head back and forth. She was surrounded. Surrounded by the death. Blood everywhere. She lifted her hand and saw the woman’s blood drip from her fingertips.

Desperately she tried to wipe her hands clean, for now she could feel the slimy slickness coating her skin, choking her, as she pushed away from the bed. The scream that ripped through her throat followed her out as she tumbled backward and into the black.

She woke with her heart leaping against her chest. Surging up, Cassie fought to shove aside her covers. Arms and legs shaking with terror, she nearly tripped over Luna as she began running for the door. Something made her stop, made her catch her breath and think.

Derek, she realized. She needed Derek. Not only to find the woman, but she needed him with her. To help get her through.

Snatching up her phone, Cassie barely noted the time showing nearly 2am. She wasn't worried about that courtesy at the moment.

“Derek!” she rushed out his name as soon as his sleep roughened voice answered. “I dreamed about a woman, you have to help me! She’s in some really fancy condo or townhouse and she's already dead."

“Cassie,” he said when she stopped talking abruptly. “How do you-”

He halted then and after all the hesitation and doubt he'd previously grappled with, Derek allowed himself to have a little faith.


Open only to those who can legally enter, receive and use a RoanePublishing.com Gift Code.  No purchase necessary, but you must be 18 or older to enter. The winner will be chosen by rafflecopter, and announced on the widget. Winner well be notified by emailed and have 48 hours to respond or a new winner will be chosen. The number of entries received determines the odds of winning. This giveaway was organized by Roane Publishing's marketing department.