One night changes everything, putting their friendship—and their love—on the line. 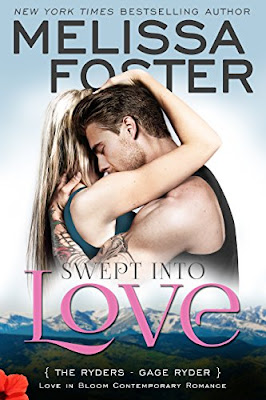 It’s been years since Sally Tuft’s husband died and she was left to raise her teenage son alone. And almost as long since she told the only other man she’d ever wanted that they should be just friends. Now her son has left for college and Sally has no distractions to keep her from thinking about her best friend and coworker, Gage Ryder, and what could have been.

Gage always believed that one day Sally would move past the death of her husband and they would finally explore the passion that’s simmered between them since the day they met. Tasked with opening a new youth center in Oak Falls, Virginia, Gage hopes the trip away is just what they need to finally come together.

Before Gage and Sally ever reach Oak Falls, one night at a conference changes everything, putting their friendship—and their love—on the line, and the two must decide if getting swept up in love is the beginning of forever, or the end of their friendship as they know it. 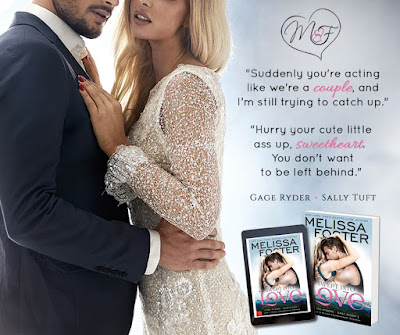 Sally Tuft finds herself in quite the predicament.  Of course Gage Ryder doesn’t seem to mind.  He plays a song for Sally that if I weren’t in a library at the time I would have put my headphones on and sing along.  This is one thing about this author’s books; they always make you feel something.  But mostly they make you feel good.

This is a very romantic story.  It’s a story about a man who is willing to wait for the woman he loves.  As I was reading this latest from one of my favorite authors, I felt like I should be reading this cuddled up with someone.  Even though this is summer time, it seemed like I needed a nice fire, a glass of something, and this great book.

Gage is a very likable character – and why wouldn’t he be when he’s willing to do just about anything for his ladylove.  Sally is a woman starting over but is apprehensive about change.  I think some of us would be the same.  This is something that I love about Ms. Foster.  She seems to create characters that we all can relate to.  There are parts that may have you laughing, there are parts where there may have a tear or two, but there are plenty of parts that will make you happy.

We have a book that’s the fifth in a series but in no way did I feel that you needed to read the previous four books.  This is good for you if you are starting with this book.  It’s a story where you feel a part of the family.  That’s the best feeling – especially when you read the ending.  I can’t wait to see what book will be my next read by this author.

Sally Tuft awoke to a freight train running through her head and the worst cotton mouth she’d ever experienced. She lay on her back, eyes closed, trying to remember what happened last night after the conference she’d attended. Thank God what happened in Vegas stayed in Vegas, because she didn’t need her boss finding out she got rip-roaring drunk. She rolled onto her side, coming face-to-face with hot whiskey breath. Her eyes flew open and she bolted upright, clutching the sheet to her chest. Her heart pounded wildly as she took in the gorgeous sandy-haired man lying next to her. Oh shit! Shit, shit, shit!
No. This can’t be happening.
She slammed her eyes shut, trying to calm her mounting panic by breathing deeply, but that made her head hurt even worse.
Her eyes opened slowly, roving over Gage Ryder’s scruffy jaw and the full lips she’d fantasized about so many times she should be arrested. This was bad. Very bad. Gage had been her best friend and co-worker since her husband was killed in a skiing accident several years ago. And worse, he was her son’s confidant. The man whom Rusty went to with problems his father was no longer there to help him with.
Her gaze trailed over his broad shoulders and muscular chest as realization set in. She bit her lower lip, holding her breath as she lifted the sheet. Please let me have something on. At least underwear. The pit of her stomach twisted at the sight of her closer-to-forty-than-thirty, less-than-perky bare breasts, and stomach that had never quite regained its elasticity after having her now twenty-year-old son. Oh God!
Gage rolled onto his back, and her eyes were drawn to the formidable bulge lifting the sheets. Look away. Look away.
She couldn’t look away. He’d made his feelings for her clear without ever actually spelling them out. Would he mind if she looked? Oh God! I should mind! She needed to force those desires back into Ignore mode. Closing her eyes and gritting her teeth, she tried to do just that. But the urge to look was too strong, and they popped open again, drinking in every hard inch of him.
His left arm stretched over his head, coming to rest on the pillow. The other reached beneath the sheet and adjusted himself. Her nipples prickled to tight points. Now was not the time to get turned on, but she couldn’t stop staring as he sleepily pushed the sheet down his chest, revealing solid abs she’d seen a million times—but never once in bed. They were sexier than when he was playing basketball or chopping wood to heat his home. Oh God, she loved to watch him chop wood.
Her eyes moved to the other wood in sight. She heard a whimpering sound and realized it came from her. She snapped her mouth shut. She had to get out of there before he woke up and realized what they’d done.
What if he remembered what happened—or didn’t—last night? She was never going to drink again. Not in this lifetime, and definitely not with Gage Ryder.
She clutched the sheet and slid to the edge of the bed, struggling to dredge up memories of last night from the muddled recesses of her mind, but her head was spinning. At least her hangover had taken a backseat to the reality of having slept with Gage. He rolled toward her as she stepped quietly from the bed. The sheet caught beneath him and pulled from around her.  She gasped, her hands darting to cover all her private parts as Gage’s amused blue eyes opened and followed her frantic hands. A slow smile crept across his gorgeous face. She needed more hands! She yanked the sheet from the bed and turned around.
“Don’t look!” she yelled as she tried to wrap it around her. “Oh my God. Gage!”
“Sally…?”
“Don’t say a word. Wait. Please tell me we didn’t have sex. Just…” She shook her head and spun around, bringing Gage and all his naked glory into full view. For a second she was struck mute, her jaw hanging open. His thick arousal lay nestled between powerful thighs, on a manicured tuft of dirty-blond hair.
“See something you want?” Gage said with a chuckle, snapping her brain into gear.
“You’re naked!” She spun around again, breathing so hard she feared she might pass out.
“You whipped the sheet off me,” he said far too casually.
“I’m naked!”
“I see that, and I prefer you without the sheet.”
“Gage!” She huffed. “Put a pillow over yourself! Cover that thing up.”
He sighed loudly and she heard the rustling of the pillow.
“Okay, Salbird. I’m covered, but given that we’re both naked, I’m pretty sure you got more than an eyeful last night.”