Life is not going well for archaeologist Sam Bellamy. She’s stuck in the middle of the ocean on a salvage boat with people who want her dead. It wasn’t her gift for being able to sense objects of power that got her here, rather her need to make a secret society called the Knights of the Dragon pay for killing her mentor. Sam doesn’t believe in dragons, but the Knights do, and if she can get one of the sacred artifacts they’re searching for away from them, she’ll consider it payback.
Ezra Easton is content to run his marine salvage company and live alone on his private island. He may be a four-thousand-year-old water drakon, but he’s civilized enough to know just because he pulls an injured woman from the ocean, doesn’t mean he gets to keep her…
When she wakes up, she has a few tall tales to share, and it seems the Knights are after her. But this drakon won’t give up his treasure.

“What did this Gervais Rames want?”

She leaned her head on his shoulder. “He told me about the Knights and what they did. I mean, the idea of drinking dragon blood when the creatures don’t even exist is really out there. He told me how they killed people like Brian all the time in their quest for power and eternal life.” She tipped back her head and peered up at him. “I gotta tell you, I almost called the cops right then and there. I mean, there’s no such thing as dragons and eternal life. That’s all fantasy. Right?”

“Right,” Ezra agreed. No need to upset her by informing her she was sitting in the arms of a water drakon who’d lived for thousands of years. And by the way, if she drank his blood on a regular basis, she’d be cured of any disease and live indefinitely. Nope, best to keep his mouth shut. His dragon grumbled inside him but didn’t give him too much grief.

“But the fact remains that these people think it’s real. It’s like the alchemists centuries ago trying to turn base metal into gold. People do kill in the pursuit of arcane and forbidden knowledge. I’ve made it my life’s work to study such things. I know what different cultures have done since the dawn of time, the atrocities they’ve committed in pursuit of their cause.”

Ezra was well aware of the lengths humans would go to in order to try to live forever or appease their gods, whichever ones they happened to be worshipping depending on the time in history.
“So you believe the society is real, but not the creatures they’re searching for?”

“So how did this Rames know about them?”

She rubbed her hands up and down her arms. Ezra reached out and snagged her coffee. She gave him a grateful smile and she took a large swallow. “Thanks.”

“Rames?” he reminded her, eager to finish this conversation so she could rest.

“This is where the story takes an even crazier turn.”

He gave her a small smile. “I think I’m past being surprised.”

“It seems that Rames was part of another secret society, only this one works to oppose the Knights of the Dragon. Their mandate is to protect all dragons. They call themselves the Dragon Guard.”

He’d told her he was past being surprised, but he’d lied. She’d managed to totally stun him. 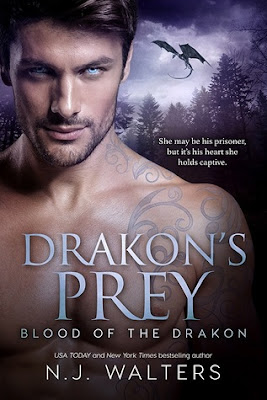 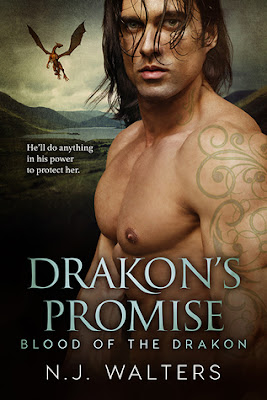 N.J. Walters is a New York Times and USA Today bestselling author who has always been a voracious reader, and now she spends her days writing novels of her own. Vampires, werewolves, dragons, time-travelers, seductive handymen, and next-door neighbors with smoldering good looks—all vie for her attention. It’s a tough life, but someone’s got to live it.