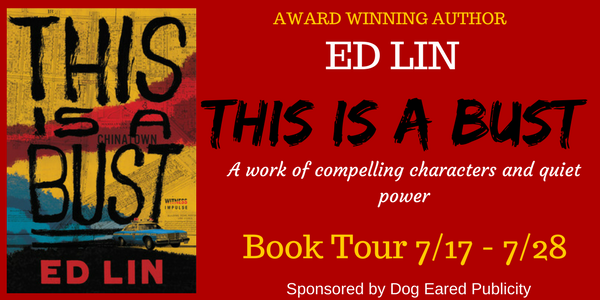 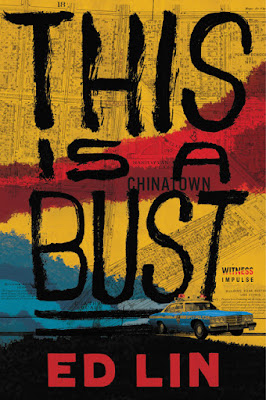 Set in New York’s Chinatown in 1976, this sharp and gritty novel is a mystery set against the backdrop of a city in turmoil
Robert Chow is a Vietnam vet and an alcoholic. He’s also the only Chinese American cop on the Chinatown beat, and the only police officer who can speak Cantonese. But he’s basically treated like a token, trotted out for ribbon cuttings and community events.
So he shouldn’t be surprised when his superiors are indifferent to his suspicions that an old Chinese woman’s death may have actually been a murder. But he sure is angry. With little more than his own demons to fuel him, Chow must take matters into his own hands.
Rich with the details of its time and place, this homage to noir will appeal to fans of S.J. Rozan and Michael Connelly.

January 20, 1976. The Hong Kong-biased newspaper ran an editorial about how the Chinese who had just come over were lucky to get jobs washing dishes and waiting tables in Chinatown. Their protest was making all Chinese people look bad. If the waiters didn’t like their wages, they should go ask the communists for jobs and see what happens.

Here in America, democracy was going to turn 200 years old in July. But the Chinese waiters who wanted to organize a union were going directly against the principles of freedom that George Washington, Thomas Jefferson, and Abraham Lincoln had fought for.

Those waiters were also disrespecting the previous generations of Chinese who had come over and worked so hard for so little. If it weren’t for our elders, the editorial said, today we would be lumped in with the lazy blacks and Spanish people on welfare.

I folded the newspaper, sank lower in my chair, and crossed my arms. I banged my heels against the floor.

“Just a minute, you’re next! Don’t be so impatient!” grunted Law, one of the barbers. A cigarette wiggled in his mouth as he snipped away on a somber-looking Chinese guy’s head. When he had one hand free, he took his cigarette and crushed it in the ashtray built into the arm cushion of his customer’s chair.

He reached into the skyline of bottles against the mirror for some baby powder. Law sprinkled it onto his hand and worked it into the back of the somber guy’s neck while pulling the sheet off from inside his collar. Clumps of black hair scampered to the floor as he shook off the sheet.

The customer paid. Law pulled his drawer out as far as it would go and tucked the bills into the back. Then he came over to me.

Law had been cutting my hair since I was old enough to want it cut. He was in his early 60s and had a head topped with neatly sculpted snow. His face was still soft and supple, but he had a big mole on the lower side of his left cheek.

You couldn’t help but stare at it when he had his back turned because it stood out in profile, wiggling in sync with his cigarette.

He looked at the newspaper on my lap.

“We should give all those pro-union waiters guns and send them to Vietnam!” Law grunted. “They’ll be begging to come back and bus tables.”

“They wouldn’t be able to take the humidity,” I said.

“That’s right, they’re not tough like you! You were a brave soldier! OK, come over here. I’m ready for you now,” Law said, wiping off the seat. I saw hair stuck in the foam under the ripped vinyl cover, but I sat down anyway. Hair could only make the seat softer.

“I don’t mean to bring it up, but you know it’s a real shame what happened. The Americans shouldn’t have bothered to send in soldiers, they should have just dropped the big one on them. You know, the A-bomb.”

“Then China would have dropped an A-bomb on the United States,” I said.

“Just let them! Commie weapons probably don’t even work!” Law shouted into my right ear as he tied a sheet around my neck.

“They work good enough,” I said.

When Chou En Lai had died two weeks before, the Greater China Association had celebrated with a ton of firecrackers in the street in front of its Mulberry Street offices and handed out candy to the obligatory crowd. The association had also displayed a barrel of fireworks they were going to set off when Mao kicked, which was going to be soon, they promised. Apparently, the old boy was senile and bedridden.

“That’s how you have to have it, right? Short all around, right?” Law asked.

“That’s the only way it’s ever been cut.”

If you didn’t tell Law how you wanted your hair, even if you were a regular, he’d give you a Beefsteak Charlie’s haircut, with a part right down the center combed out with a Chinese version of VO5. I was going to see my mother in a few days, and I didn’t want to look that bad.

“Scissors only, right? You don’t like the electric clipper, right?”

“That’s right,” I said. When I hear buzzing by my ears, I want to swat everything within reach. Law’s old scissors creaked through my hair. Sometimes I had to stick my jaw out and blow clippings out of my eyes.

The barbershop’s two huge plate glass windows cut into each other at an acute angle in the same shape as the street. Out one window was the sunny half of Doyers Street. The other was in the shade. How many times had I heard that this street was the site of tong battles at the turn of the century? How many times had I heard tour guides say that the barbershop was built on the “Bloody Angle”?

The barbershop windows were probably the original ones, old enough so they were thicker at the bottom than at the top. They distorted images of people from the outside, shrinking heads and bloating asses. In the winters, steam from the hot shampoo sink covered the top halves of the windows like lacy curtains in an abandoned house.

In back of me, a bulky overhead hair dryer whined like a dentist’s drill on top of a frowning woman with thick glasses getting a perm.

The barbers had to shout to hear each other. The news station on the radio was nearly drowned out. The only time you could hear it was when they played the xylophone between segments or made the dripping-sink sounds.

If you knew how to listen for it, you could sometimes hear the little bell tied to the broken arm of the pneumatic pump on the door. The bell hung from a frayed loop of red plastic tie from a bakery box. When the bell went off, one or two barbers would yell out in recognition of an old head.

The bell went off, and Law yelled right by my ear.

“Hey!” he yelled. Two delayed “Hey”s went off to my left and right. The chilly January air swept through the barbershop. A thin man in a worn wool coat heaved the door closed behind him and twisted off his felt hat. His hands were brown, gnarled, and incredibly tiny, like walnut shells. He fingered the brim of his hat and shifted uneasily from foot to foot, but made no motion to take off his coat or drop into one of the four empty folding chairs by the shadow side of Doyers. He swept his white hair back, revealing a forehead that looked like a mango gone bad.

“My wife just died,” he said. If his lungs hadn’t been beat up and dusty like old vacuum-cleaner bags, it would have been a shout. “My wife died,” he said again, as if he had to hear it to believe it. The hairdryer shut down.

“Oh,” said Law. “I’m sorry.” He went on with my hair. No one else said anything. Someone coughed. Law gave a half-grin grimace and kept his head down, the typical stance for a Chinese man stuck in an awkward situation. The radio babbled on.

The barbers just wanted to cut hair and have some light conversation about old classmates and blackjack. Why come here to announce that your wife had died? The guy might as well have gone to the Off Track Betting joint on Bowery around the corner. No one was giving him any sympathy here.

I stood up and swept the clippings out of my hair. The bangs were longer on one side of my head. I slipped the sheet off from around my neck and coiled it onto the warmth of the now-vacant seat. Law opened a drawer, dropped in his scissors, and shut it with his knee. He leaned against his desk and fumbled for a cigarette in his shirt pocket.

I blew off the hair from my shield and brushed my legs off. I pushed my hat onto my head. 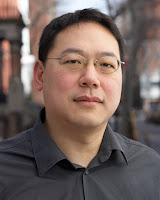 Ed Lin, a native New Yorker of Taiwanese and Chinese descent, is the first author to win three Asian American Literary Awards and is an all-around standup kinda guy. His books include Waylaid, and a trilogy set in New York’s Chinatown in the 70s: This Is a Bust, Snakes Can’t Run and One Red Bastard. Ghost Month, published by Soho Crime in July 2014, is a Taipei-based mystery, and Incensed, published October 2016, continues that series.
Lin lives in Brooklyn with his wife, actress Cindy Cheung, and son.


Connect with Ed at http://www.edlinforpresident.com or on social media at:

Book featured at Chill and Read

Guest blogging at Must Read Faster

Book featured at The Writers' Life

Interviewed at As the Page Turns

Guest blogging at Thoughts in Progress

Book featured at Stuck in YA Books

Book featured at The Angel's Pearl

Book featured at The Toibox of Words

Book featured at A Book Lover

Book featured at Mello and June