Meet the Magicorum: modern folks who are supernaturally locked into fairy tale life templates. For eighteen-year-old Elle, that role is Cinderella. Meanwhile, Agatha is her evil stepsister. Things go downhill from there…

Cinderella On The Run

Elle—never call her Cinderella—has found the love of her life in Alec Le Charme, the prince of a jewelry dynasty. But when Alec gets spirited away, Elle must ditch her Manhattan home for the perilous Faerie Lands. To save Alec, Elle must also swap her glass slippers for a flying carpet. But will switching templates from Cinderella to Aladdin snap Elle’s sanity?

Whatever. Bring on the straight jacket. Elle is one Cinderella who’s determined to save her prince, no matter what.

Agatha always accepted her role as Elle’s evil stepsister. Then her life template changes from nasty sibling to evil elf queen. Agatha has one thought on that score. Thanks but no thanks. Agatha refuses the regal life, even though stepping away from her crown means ignoring her lifelong attraction to the elf prince, Jacoby.

Then everything changes. Agatha discovers that Elle’s life is at risk… and the only way to save her Cinderella is by teaming up with Jacoby. Trouble is, that’s a lot of togetherness. Working with Jacoby could easily end in disaster, not only for Agatha’s heart, but also for Elle and Alec’s lives.

Fairy Tales of the Magicorum 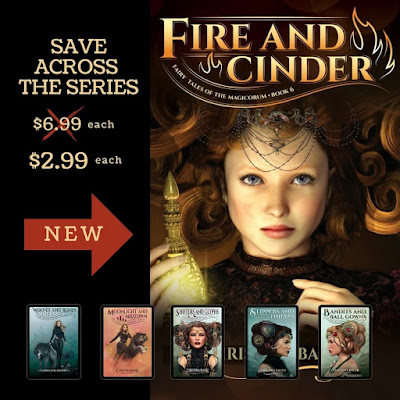 Modern fairy tales with sass, action, and romance
1. Wolves and Roses
2. Moonlight and Midtown
3. Shifters and Glyphs
4. Slippers and Thieves
5. Bandits and Ball Gowns
6. Fire and Cinder
7. Fairies and Frosting

Christina Bauer thinks that fantasy books are like bacon: they just make life better. All of which is why she writes romance novels that feature demons, dragons, wizards, witches, elves, elementals, and a bunch of random stuff that she brainstorms while riding the Boston T. Oh, and she includes lots of humor and kick-ass chicks, too.

Christina graduated from Syracuse University’s Newhouse School with BA’s in English along with Television, Radio, and Film Production. She lives in Newton, MA with her husband, son, and semi-insane golden retriever, Ruby.

Be the first to know about new releases from Christina by signing up for her newsletter: http://tinyurl.com/CBupdates