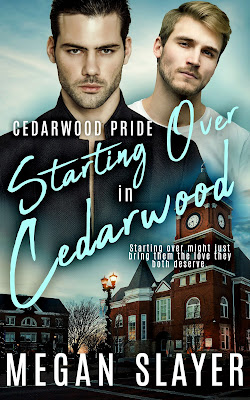 Starting over might just bring them the love they deserve.

Shaun Fallows came to Cedarwood to start over. He wants to be done with dating, but the moment he sees Kevin, the sparks are off the charts. He can't get the sexy man off his mind. So much for not wanting to get involved. Kevin is the man of his dreams. Can he convince Kevin to give him a try or will the romance end before it gets the chance to begin?

Besides, there's the small issue of Kevin's cat...

“Excuse me. Do you have soggy buns, too?”

Shaun froze, then looked at Cara, who’d gone pale. She hadn’t been the one to ask the question and the speaker didn’t sound like Warrick. Shaun turned his attention to the one who had spoken. Kevin. Shaun’s breath lodged in his throat. The man was even more handsome up close. Shaun noted the sprinkling of hairs on Kevin’s cheeks and the lines crinkling at the corners of his eyes. Were those flecks of silver at his temples, too?

Kevin cleared his throat. “I’m sorry. The other table is complaining about the buns being subpar. Are your dining choices up to your standards?”

“Uh…” Shaun had to sound intelligent, not silly, but he couldn’t manage to form a normal sentence.

“Are you sure? We’re here to provide a fine dining experience,” Kevin said. “At decent prices.”

“You sound like you’re a walking advertisement,” Shaun managed. He balled his hand on his thigh under the table and drew in a deep breath to center himself. He’d never had problems talking to guys before now. “I don’t think our buns are soggy.” He smiled and met Kevin’s gaze. “But I would like to ask you a question.” Christ. Confidence, don’t fail me now.

“Do you need more ketchup? Some of the bottles are low.” Kevin shook his head, then reached across the table to retrieve the bottle. “I let Buzz handle it and he only filled about half of them.”

“No.” Shaun touched Kevin’s forearm, stopping him. The move also sent tingles along Shaun’s nerve endings. His synapses stood at full alert. “I… Would you like to grab a beer sometime?”

“Oh.” Kevin froze and confusion clouded his eyes. “You want to go out with me?”

“I do.” Shaun mustered his confidence. “I know it’s a strange time to ask you that, but I wasn’t sure if I’d get to see you again. It’s just beers or coffee, but I’d like to go out sometime with you.” Christ. He’d managed to stumble over everything he’d just said.

“Uh, sure.” Kevin stood at his full height and clasped his hands together. “But you’re sure you’re happy with the food?”

“Very.” Shaun scrawled his number on a piece of paper. “Call me when you’re free. I’d like to buy you that beer or coffee.”

Kevin tipped his head and a slight smile curled on his lips. A crooked smile. “I will.”

When Kevin walked away, Shaun considered what he’d done. “I asked him out.”
©2021 MeganSlayer All Rights Reserved 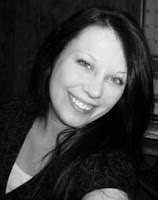