Today we have the blog tour for TESORO by Nicole Banks, a complete standalone you are not going to want to miss out on! Get your copy today!

Tommy worked hard to establish a life outside of his father’s legacy. Son to the infamous Delucia family, he’s the heir to a throne he doesn’t want. As loyalties keep pulling him back in, he struggles to obtain a clean break. Becoming a new man is just out of arm’s reach.


Naila is a sassy, headstrong entrepreneur with businesses in the Delucia territory. A chance meeting between the two has Tommy questioning everything about his life and what his future holds.

As circumstances keep putting them in each other’s paths, the two can’t deny the building chemistry between them. As passions ignite, so does the tension surrounding the Delucia family, catching them both in the crosshairs of an all-out war.


When the dust settles, there’s only one question remaining: how deep are they willing to go?

Naila Ackerman certainly has her hands full.  But still has time to indulge.  Tommy Delucia knows what he’s got and what he wants.  But there’s certain things he doesn’t want to admit wanting.  These two don’t start off with a relationship but they seem to always end up in the same place at the same time.

Now the author could have left things building as they were and I would have been a happy camper.  But being set in New York we have the questionable element that’s woven through the story.  That just adds in a little more excitement and even some action, suspense, and adventure.  If you’re a fan of mafia romance this may be one that you’ll want to check into.

Naila is a very resourceful woman and knows how to stick up for herself.  She’s a woman who instead of working for someone else has someone else working for her.  But it comes with its own set of problems.  There’s a scene where the light bulb finally brightens and it was interesting to watch her process that information.  Tommy may be a product of his heritage.  He seems to be very passionate.  I couldn’t decide whether to give him the label of “Romeo” or not.  It was a good reason to keep reading because you want to see if he can tempt a certain woman.  Plus there were times where I wanted to say “someone doth protest too much”.

Our author also includes a couple of characters that you’ll love to hate.  The first person you may hate is a man who supposedly has feelings for Naila.  For me, the best one word I first came up with is “Jerk”.  The second character is a man who just seems to feel that he can act disrespectfully to a woman.  You’ll have to see if you don’t feel the same.  The ending left me a little up in the air.  It left me with a “what?”  Does it mean there’s more?  Does it mean that I have to come up with my own ending?  I guess what it means is that I’ll have to keep an eye on what other books this author comes out with. 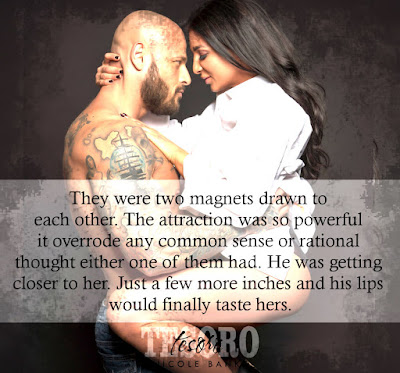 He was gone for her the second he saw her sitting alone at that restaurant. He had deep-seated need to get inside of her––to know her, to consume her in the way she had captured him by just breathing.
Whatever he was hit with that first night, only seemed to intensify over these past few days, like someone decided to turn the volume up on what he was feeling.
He chuckled low in his throat, when he thought about the power she already had over him. She could ask him to destroy the world, and he’d do it with ease simply because she asked.
He hit the text icon and sent a message to Naila: Make sure you have your dessert, tesoro. I’ll see you later tonight.
The phone chimed: If I didn’t know any better, I’d think you were trying to fatten me up. Lol.
Tommy: I like my women with a healthy appetite for things….food is one of them.
Naila: And what are the other ones?
Tommy: I’d much rather show you. Oh and Naila?
Naila: Yes?
Tommy: Don’t even think about playing with yourself to relieve that ache between your legs. I want that privilege, tesoro.
She didn’t respond right away. Tommy didn’t think he overstepped, but texting was a weird space for people to communicate. He’d much rather call her––to hear the exact moment her breathing changed when he told her not to touch herself. But he didn’t want to give the boys in the warehouse any hint to who he was talking to.
The phone chimed; he looked down and smiled.
Naila: I don’t like being told what to do, Tommy. You should learn that, quickly. Besides, I’ve already had my fingers inside of me, making myself cum twice. It didn’t take long, either. All I had to do was imagine my fingers were you.”
Tommy let out a pained chuckle, and all eyes shot to him. He shook his head and turned his back on Bear and the guards to give himself whatever privacy he could. He didn’t want Bear to see exactly what he was feeling written all over his face.
Tommy: What am I going to do with you, tesoro? You have my dick painfully hard, and you relieved yourself while I suffer? That’s not nice. I’ll be sure to punish you for that when I come back to you.
Naila: Promises, promises. Be careful tonight, Tommy.
Tommy: Always, tesoro.

Creatively living through music, writing and yoga. I love the arts and how they
move you and make you feel. Reading has always been a great love of mine right after my
love of music. Each song written is a story waiting to be told. Which, along with my over
active imagination fueled my desire to write about the chaos that goes on in my head.I love
stringing words together. I love making people get lost in a story and connecting with fictional
characters that remind them of someone they know. I published my first book Shattered in
2013. It’s the first installment in the Shattered Hearts Series. Shattered started out as an
assignment for a college course I took at John Jay College of Criminal Justice. After I
graduated college I went through my old papers and reconnected with the story morphing
into so much more then what I wrote in my college course.Now you can find me doing yoga,
listening to music and working on getting out all the stories in my head, including dabbling in
poetry. (Which I've always had a secret love affair with).