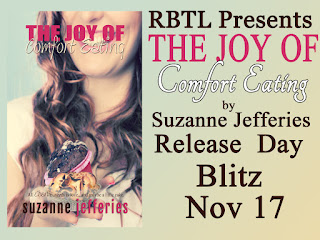 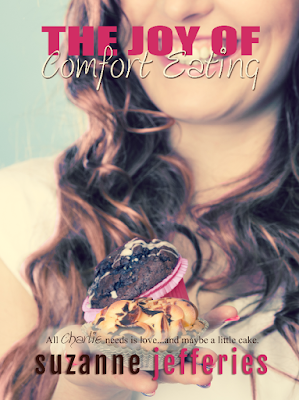 It’s the worst day of Charlie Everson’s life. Not only can she no longer fit into her clothes—disaster for any public relations director—but also her first love, the sexy super-successful Brian Tendai, is her new CEO, the last person she ever expected to run into. Seeing him again tumbles Charlie back into her past. There are still so many unanswered questions: he’s convinced she left him, she’s convinced he left her. Charlie minimizes the ‘ex’ factor. Tell that to her emotions that are running wild.

But Brian’s not there to rekindle their romance. He’s overseeing Queenswood Communications’ recent merger after a hostile takeover. Guess whose name is at the top of the list?

They agree to one night together, just the one, then it’s back to business as normal. Or is it?


The Joy of Comfort Eating is a contemporary romance novel set in cosmopolitan Johannesburg. 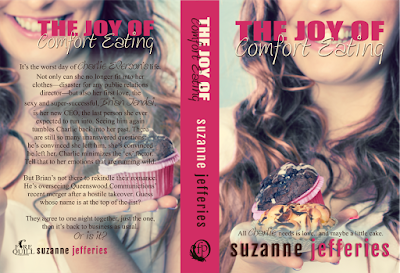 Charlie picked up her diary, and some cuttings that needed photocopying before making her way to the office kitchen. Her third trip of the morning. She intended to make a quick in and out.

Conversations about Pauline Black, her viper-bitch boss, the lack of proper coffee, the surge for new business, Pauline Black—a popular topic—and the crappy pay, did not interest Charlie today.

When she arrived at work, James had not been by to say hello. Nothing. James had not called that morning. He hadn’t even tried to SMS. Or email. And her attempts to curl her hair with a straightener had resulted in an untimely kink. Her sweater cooked her. But, thankfully, it covered her backside.

This denim skirt is a definite mistake.

My word, the kitchen was...what was the word? Buzzing. That could only mean one of two things. There was either food, but there had been no reminder for a birthday tea on the notice board. Or, there was a new man, and Charlie could probably guess who.

As she shifted over to the kettle, trying not to catch any stray eyes, she listened.

“Did you see what he was wearing?” asked Busi.

“No, not the shoes, that shirt. It was just so”—she gesticulated with her hands—“so square-cut, so masculine, so…perfect.”

“He is gorgeous, isn’t he? Married, I suppose?”

Charlie heaped four tablespoons of hot chocolate into her mug, adding a drop of milk before beating it into a thick paste.

Charlie poured the steaming hot water over the paste, watching the chocolate bubble over as it swam to the top of the mug.

“Isn’t he fucking gorgeous?” Charlie heard Shelley ask behind her. “What do you think? Oh, Charlie, you’re getting hot chocolate all over the floor.”

Charlie wiped the underside of her mug with the sleeve of her sweater.

“I said to myself: Now, Shelley, calm down here. He is just a man and all—”

“Who’re you talking about?” Charlie interrupted. As if she didn’t know.

“The new CEO.” Shelley took her mug down from the shelf, its porcelain finish had a slight crack in it.

“I can hardly believe he’s the new CEO. We don’t often get good-looking men in here.”

Charlie slid her finger around the rim of the mug to catch the escaping chocolate rivulets. “Who’s that?” she asked, slurping, feeling the warmth ooze through the ceramic of the mug. “Brian someone or other?”

“Pauline mentioned him yesterday. In the meeting? Remember? They say he’s divorced, and has two houses on the coast of France,” Shelley continued, smoothing her bob to the side, and wiping away any stray mascara from under her eyes.

“Lucky him,” Charlie murmured. She thought about walking past James’ office. Maybe send him a funny email? I know, I’ll send him a WhatsApp wink.

“He used to be a big CEO of an electronics company or some such. Something about digital music, I think.” Busi continued applying a big glob of lip gloss.

“No, not of someone else’s company. His own company. Some Internet business, or something to that effect,” added Busi. “Damn, I best get back to my desk. Don’t want Pauline in here.”

Reality check. Must be a different Brian. Hers wouldn’t have been caught dead as a CEO of a communications company. Not even a listed one. Now, as a lead guitarist in a rock band, definitely. That’s all he’d talked about. That and Arsenal winning the Premier League, which seemed unlikely at the time with Man U sucking up everything in sight. Busi had mentioned music, though.

“Why the hell’s he at Queenswood, then? I thought he was here to chop out the dead wood, then move on to whatever venture comes up next,” Charlie asked, watching Busi and Sarah’s departing backs.

“C’mon, Charlie, I doubt it’s that dramatic. But I intend to find out. After all, I am one of the most, if not the most interesting women here,” Shelley retorted, barracuda smile in place as she took her tea and slunk out of the kitchen.

Having hoovered up most of her hot chocolate, Charlie thought about placing marshmallows between Tennis biscuits, then blowing them up into sticky delight in the microwave.

She checked the biscuit barrel. No such luck. She checked her watch. Too early for the door-to-door sandwich man.

“And this here is Charlotte.” She heard Shelley in the corridor before she saw her, beaming from ear to ear. With her hand on his sleeve, she announced, “Charlotte, this is our new CEO.”

Brian-Badass-Tendai. There. In front of her.

She felt the flush from the top of her head to the soles of her feet.

“Char-lie Ever-son,” he said, stretching her name out. “How are you?”

“Good.” She wiped away the chocolate moustache, and then flipped her hair.

There was absolute silence as she drank him in; tall—still tall—deep brown eyes, broad shoulders. His hands.

Remember those hands, she asked herself.

Suzanne Jefferies loves to write contemporary romance and paranormal fiction. She believes in happily-ever-afters, in fiction. As a member of ROSA (Romance Writers of South Africa), she knows that she’s not the only believer in romantic tension and emotional power smacks to keep the romance reader hooked. A movie fanatic, she spends most of her time writing scripts, fielding production for short films, and trying again. Working in communication, she has done more than her fair share of corporate and investor PR, and now lectures in between editorial jobs for big, glossy company magazines. The Joy of Comfort Eating is her first contemporary romance novel.