Blurb: Catherine McCoy has been on the move for a year. Hiding the secret and guilt in her heart, she expects her stay in small-town
Texas to be brief. Her plan changes after she meets Sheriff Matt Ballard, who ignites a flame of passion she thought lost forever.

Matt has scars of his own. He left the big city after an undercover operation went bad. Now, he hunts for a serial killer who paints his victims like porcelain dolls. Catherine becomes a safe haven for him. Two tortured souls finding comfort in each other's arms—until he uncovers her secret, and their bond of trust is broken.

When Catherine disappears, Matt races to find her, fearing the murderer has found his next green-eyed doll. But the killer has a surprise coming. Catherine will fight to the death before she'll be a victim. Will her determination be enough?


She’d never know how close he came to kissing her. Damn, he couldn’t take his eyes off her mouth. Her full lips drew him to her. Pulled with the strength of a magnet. Her hands pushed against his chest.
“Turn me loose.” Her tone dropped an octave with each word, sending him back a step.
“Of course. I don’t know where my mind went.” Crap, he hadn’t acted this foolish since junior high. Vulnerability hid under that layer of tough-girl independence, and he found her captivating.
Red flags of color hit her cheeks. “I do.”
“Come in.” The dog approaching from the barn provided him an excuse to change the subject. “I'd better feed him first. He’s always hungry.” Matt grabbed a sack of groceries from the bed of his pickup and carried it inside. “I wouldn’t try to pet him,” he cautioned as he put the bag on the counter.
“What’s his name?”
“He doesn’t have one, he…” Matt’s jaw dropped, and he stared in amazement. Catherine had squatted down, and the big lummox of a dog had his head buried in her hands. “I don’t believe it. Ungrateful mutt eats my food but won’t let me near him.”
“He’s a sweetheart. You can’t own a pet and not name him.”
“He doesn’t belong to me.”
“Obviously he does. He lives here with you.”
“We sort of share space. We do talk. For some reason, he hasn’t told me his name.”
“Tell me what I can do to help with supper.” She walked to the sink to wash her hands.
“You can scrub those two potatoes, wrap them in plastic wrap, and stick them in the microwave. I’m going out back to start the fire.”
Catherine was standing in his living room when he stepped back inside. She smiled and her beauty hit him in the gut. She’d called him John Wayne the other night. Shit, his attraction to her was far from heroic. It was old-fashioned lust. He couldn't keep her out of his thoughts. She was not only beautiful...she had a secret. And secrets made him curious.
“Want the grand tour?”
“Please.”
“Not much to see.”
His living room furniture consisted of one leather recliner and a big screen TV. He had no pictures of family to show her, but then there were no tables to set them on. They passed by a couple of rooms with unpacked boxes setting around. He paused in the hallway before allowing her to venture into his bedroom.
“I’m not much of a housekeeper,” he said looking at his unmade king-size bed. Until now, he hadn’t noticed that it looked like a small army had marched over it. The closer she got to the bed, the closer he got to her.
She turned and bounced off his chest. Instantly her cheeks turned pink.
“I’ve seen enough. Thanks.”
“You’re welcome to look around anytime.”
He inched closer, raised his hand to her cheek, and drew a line down her jaw with the tips of his fingers. He tipped her chin up and brushed his thumb across her bottom lip. Somebody moaned. Thank God, it was her. In a quick move, Catherine stiffened and pushed him away.
“Don’t.”
Her eyes darkened to hunter green, like an angry ocean right before a storm. No. Not anger. Fear. Her gaze bounced between him and the door.
Shit. Was she going to bolt? 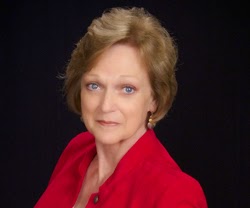 BIO: A student of creative writing in her youth, Jerrie set aside her passion when life presented her with a John Wayne husband, and two wonderful children. A career in logistics offered her the opportunity to travel to many beautiful locations in America, and she revisits them in her romantic suspense novels.

But the characters went with her, talked to her, and insisted she share their dark, sexy stories with others. She writes alpha males and kick-ass women who weave their way through death and fear to emerge stronger because of, and on occasion in spite of, their love for each other. She likes to torture people, make them suffer, and if they’re strong enough, they live happily ever after.

The author of THE GREEN-EYED DOLL, THE LAST EXECUTION, SOMONE TO WATCH OVER ME, HELL OR HIGH WATER, and COLD DAY in HELL, books 1 and 2 in the Lost and Found, Inc. series. Book 3, NO CHANCE in HELL is scheduled for release in early April.

Posted by Lynn's Romance Enthusiasm at 7:54 AM