Heart of the Dragon by Myra Nour 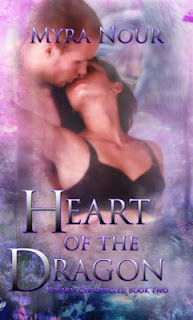 Eric is a soldier and right from the beginning we see how strong he is.  Myra starts the action right from the first chapter.  This story continues book one titled Love’s Captive.

Eric has come to Volarn to see his sister. They are at a ceremony when he looks at a woman standing near Rhamus.  Kasha is seen attending the Tartha ceremony.  It’s a place she doesn’t want to be.  But then he walks up to her.  She doesn’t make anything easy.

Myra puts her readers into a world that we don’t think exists.  She also develops a language but she doesn’t make it so difficult that you can’t figure out what she’s talking about.  She has made Eric a soldier but he’s also a man who cares about things around him.

While Kasha and Eric are out they discover something that Kasha doesn’t believe exists.  You will find that this animal they discover will steal every scene Myra writes him into.  He’s just so loveable.  He will also make you laugh.  You may also start to reminisce about your pet.

If you love to read outside, this is the perfect book to find a place in a park, maybe a beautiful garden, or even in your favorite chair with some favorite music to listen to.  But Myra has also left me wondering if she has a book three for her readers.  I want to learn more about the residents of Volarn.  We will just have to wait and see if Eric’s sister has a story.  Maybe even Jarvic has a happy ending in store for him.  But in the meantime, you can always check out to see what other books she has available.