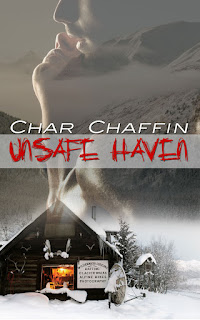 Kendall Martin appears to be planning a trip to Alaska.  I can feel some sympathy for Kendall and her trip.  My first trip in an airplane started on a two prop job.  I had a cold and a stuffy head and by the time I got to my destination I felt so sick.

One show that I love to watch on the Discovery Channel is “Fly Wild Alaska”.  If you have never watched the program, you may want to check out http://dsc.discovery.com/tv/flying-wild-alaska/ or check your local listings.  This book also reminds me of “Northern Exposure” that was on television during the early nineties.  I can picture Denn being played by John Corbett and Kendall by Janine Turner.

Kendall’s journey ends in Staamat, Alaska.  We see that Kendall is something of a mystery.   Something is going on with her that only traveling to Alaska can fix.  If you stop over to the Alaska Romance Writers of America web site, http://akrwa.blogspot.com/2012/09/unsafe-haven-book-of-my-heart.html, you can read how Char used to live in Alaska and how she went about choosing Staamat.

Denn Nulo is the Chief of Police in Staamat.  He meets Kendall at the town’s airport.  We see that Denn’s job covers more than just police work.  Kendall’s first few days start at the local Bed and Breakfast while she settles into her new surroundings – something that I would love to do.  She’s starting over fresh – there have been times in my life when I wished that I could do the same thing but then reality sets back in.

Char has given Denn a younger sister named Luna.  She’s a teenager who’s trying to deal with growing up and having juvenile diabetes.  Both that are tough separately, never mind trying to deal with them at the same time and Denn has had to be the parent.

Kendall’s new life starts when she arrives at a place located at Puffin Circle – puffins have always been one of my favorite animals.  They are one of those animals that they are so ugly they’re cute.  If you stop over to Alaska Stock, http://www.alaskastock.com/Puffin_Photos.asp, you can see some of their photos that they have taken of these animals.

Conroy Herington is spending a lot of time and money looking for someone named Victoria Wyndham.  Char shows the reader that having money has no correlation with how a person acts – some of it may be how they were raised or maybe even a chemical imbalance of some kind.  That just goes to show that wishing you were rich doesn’t necessarily make a person happy.
Char does a great job at painting pictures of true romance between her two main characters.  One reason this is considered a sensual romance is because of the lack of sex.  But she teases us enough with her words that the actual act isn’t needed.  Our imaginations can fill in any blanks.

When writing in suspense into her romance she could have gone the route that makes it a little too graphic.  Char wants to keep your attention and wanting to turn the pages.  The suspense seems to center around Conroy and it’s weaved throughout the whole story.

If you love romance stories that keep you on the edge of your seat with the hero coming to save the day, you will love Char’s latest.  If you’ve never read any of Char’s work before, what better way to change that.  Maybe you have a new Kindle or Nook and you can’t decide what to add to your library, consider adding this book – you won’t be disappointed.