Kiss of Pride by Sandra Hill 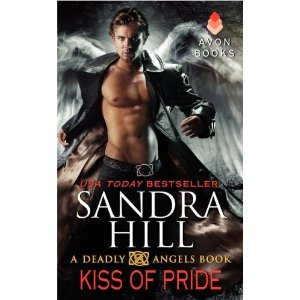 Sandra Hill has come up with an interesting concept for her main male character.  She has created a new species – Vangels.  I have not read about this type of character in any other paranormal romance book.

Would you believe that the internet helps the Vangel’s cause?  Makes you wonder what else you can find out on the internet.  What would you do if you were immortal?  Would you stick to the old ways or would you embrace anything new?

Vikar Sigurdsson is in Transylvania Pennsylvania.  He and his brothers all committed a deadly sin.  Vikar’s sin was Pride.  As you read, you will see why that is.  St. Michael, Mike to his “friends”, oversees them all.  Vikar is in the process of renovating a castle for his group.  They will also be having a big get together where Mike will oversee the proceedings.

Alexandra Kelly works for a magazine whose headquarters are in D.C.  We see that she has suffered some kind of personal tragedy.  Her boss sends her to Transylvania to check out the town and come up with a story.  Alex is staying at the Bed & Blood, a B & B.  Her first meeting with Vikar was very interesting.

I loved Sandra’s description of what Vikar looks like at their first meeting.  She also made him to be a very honest man – he tells Alex exactly what he is.  Within the story, there are references to “One Flew Over the Cuckoo’s Nest.”  If you have not seen the movie, you may want to after you finish reading this book.

I admire Sandra for mixing current, medieval, and Amish wording into the conversations.  I don’t know that I would be able to keep everything straight.  It takes a very creative person to do something like that.  And that’s why she’s the author and I’m the fan.

Vikar takes Alex on the tour of the castle – I would have loved to have been a fly on the wall.  I can just imagine her expressions as she is shown around.  It’s also funny to see one of my ancestors in the story.

The story builds to this point and then it turns serious – the job the Vangels have been working toward.  The storyline isn’t so complicated that you won’t have any trouble following the plots.  Sandra has brought a new spin to the story of good vs evil.  You want to make sure to read all the way to the end because she put something in that caught me completely by surprise.

If you are a fan of this book, you will want to make sure to keep an eye out for book 2 of the “Deadly Angels” series.  The book is titled “Kiss of Surrender” and it will be coming out in September.  There is no hint, at this time, about what book 2 is about but if you are truly a fan of Sandra’s work you will stop by her website, http://www.sandrahill.net/, and watch for any updates.