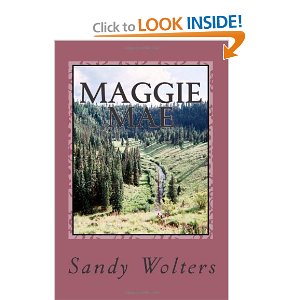 July 4, 2010
Maggie Mae Dixon is seen on the beach ready to marry the man she loves.  James David Carson is the man who filled the empty spot in her life.  But it’s all a dream.  Her husband died five years ago.

She’s come to visit with Amanda and says hello to her dad, Rafferty.  Rafferty was Jimmy’s best friend and business partner.  He also has a secret.  He wants to tell Maggie but the time has never been right.  Sandy gives us a glimpse of what Raff and Maggie had in the past.  She will have you laughing when she tells you the story of Maggie on the slopes and how Raff is there to save the day.

We see Michael Rogers telling his officer, Michelle Dooley, about an incident at the local middle school.  It will have you going eww.  Sandy’s writing makes the scene very believable and laughable at the same time.  Michael then gets an interesting call on his cell phone.

We find that it’s Maggie’s brother, Marc, on the other end and he’s in a panic.  You would think the world was coming to an end or World War III was just around the corner.  Meanwhile, Maggie is recalling an incident between her and Raff’s mother.  Can we say woman from hell?

Michael then gets to meet Maggie and she surprises him.  As you read the scene, she will surprise you as well.  There seems to be a connection that neither of them can explain.  We see her start as a caterpillar and then turn into a butterfly.

Maggie then has to go to her friend Carley’s house.  Carley has been trying to set her up for a while now.  Maggie gets very creative in getting rid of her blind dates.  It’s just one more scene where Sandy has you laughing.

Maggie’s first sexual experience, since her husband passed away, is very hot.  And at the end of the scene it’s one more time that Sandy has you laughing.  Then she turns around and turns up the heat.  But always in the back of your mind you wonder what became of Raff.  And then Michael and Raff meet – can we say roosters?

I had never heard of Sandy before.  Then I was asked to do a review of this book.  I was very happy that I was asked.  She has a way of spinning a story that has you falling in love with the main characters.  Her female character is a woman who takes no prisoners and laughing at her at the same time.  If you haven’t read “Maggie Mae” before you need to read it or at the very least have it on your TBR list.
Posted by Lynn's Romance Enthusiasm at 8:22 PM