Justice for Emily by Sandy Wolters 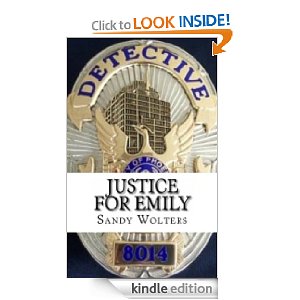 Brownwood, Texas
Patrick Sheehan is seen at a funeral for Emily Campbell.  She was loved by so many people in this small town.  She cared a lot about the town and the people that lived there.  Boyd Campbell is Emily’s husband.  Boyd is also Patrick’s boss and the Chief of Police.

Rachael Merchant knows Michael Rogers (read his story in “Maggie Mae”).  She’s a homicide cop with some very special abilities that help her in her job.  She ends up getting lost and lands in Brownwood.  The action seems to start right after Patrick and Rachael meet.  Patrick starts acting like a jealous boyfriend and Rachael thinks he’s crazy.

Sandy has given Patrick quite the ego.  She’s also made Rachael a strong-willed woman.  Patrick’s mother is a real “cracker jack” – she really loves her son.  The three of them have you turning the pages just to see what will happen between them next.  Sandy creates a morning after scene (not what you’re thinking) that has you chuckling and feeling sorry for Rachael at the same time.

This story focuses more on the unexplained.  This gives a story to those feelings you sometimes have when you just can’t explain a happening that no one else sees or feels.  It will keep you riveted until the mystery of Emily is solved – you will be hooked.

Because of the police being involved in this mystery, Sandy’s descriptions seem to be spot on.  I felt like I was watching one of the crime shows on television.  The detail she used – would love to know what type of research she did to be so accurate.

This is a story that I would love to see be made into a movie – definitely Lifetime material.  They would have to include Rachael’s bird - would make a great “running gag” in the film.  Sandy doesn’t make this a book about sex between Rachael and Patrick – even though their romance is sensual.  This is a story about making sure that justice is served.  And as you finish another great book from Sandy Wolters, please make sure to read the Author’s Notes at the end.