His Secret Dancer by Faberge Nostromo 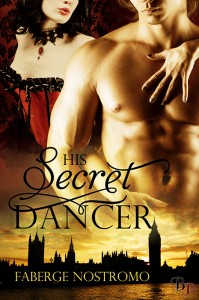 
Disclosure of Material Connection: I received this book for review from Breathless Press and from the author. I was not compensated nor was I required to write a positive review. The opinions I have expressed are my own. I am posting this in accordance with the Federal Trade Commission’s 16 CFR, Part 255: “Guides Concerning the Use of Endorsements and Testimonials in Advertising.”


Blurb: Dan's drab life is a world away from his secret life as Danielle, the burlesque star of Tomasz's transvestite nightclub, Trans-Action.

Having found 'her' inner T girl as a student, Danielle has discovered the power of her femininity and her talent to entice and excite—but she realizes that Dan's life is losing the passion it once had.

As Danielle's relationship with Tomasz takes her deeper into both her lover and his world, encountering passions neither thought they dare explore, demure Francine is too often left to her own devices and desires. Her only release is in the fantasies inspired by the customers who pass through her life and her patisserie.

Does she want a man in her life or a woman? Or both...

Seeing her man exploring her wardrobe she decides to embrace the power of her own sexuality. Then a sizzling encounter with Tomasz unlocks the vixen in her and sets their two worlds on a collision course.

Or will Tomasz come between them both?

Tomasz gazed at her, barely able to breathe, let alone speak. Her half closed eyes burned into him. He gazed deep into them for a moment, falling into them, then his attention fell to her hand, still resting on the damp silk mound of her pussy.Her breathing was labored and heavy, her lips, soft and red, parted. His hand cupped the bulge in his perfectly pressed trousers, slowly stroking along the length of its hardness but he couldn't stop.

Her eyes locked onto the movement of his hand. A smile that was halfway between an angel and a slut spread over her face. She looked up and her eyes met his again, hers burning with a fire that held his gaze, and she slipped her fingers inside the dampness of her panties, gently sliding a single fingertip over her still pulsing clit. A soft moan escaped her parted lips like a whispered invitation.

He stepped forward and cupped her face in his hands, gazing even deeper into the post orgasmic haze of the infinite depths of her green eyes. She looked up at him, inviting his kiss, wordlessly, and with her other hand reached for his hand, the hand that was slowly, rhythmically, rubbing up and down the aching need of his rigid cock. She flattened her palm on his and moved with him.

They kissed, no words needed, his mouth on hers, but hers the more powerful, needing to own and control his mouth, her tongue seeking out his. Her hand pressed against his, taking control of his movement now, slowing it so that she could feel how long and hard he was. And he was, so very hard, and long. She wanted that, she needed that, in her, fucking her. She pulled his hand up over his confined erection, slowly, so that they both felt the total extent of his arousal, and then pushed it more forcefully down and out of the way. He complied totally with her direction .He was hers now, hers to play with, to use. The kiss intensified, and her fingers unzipped him, reaching in, finding and grasping him. She felt the wet silky tip of his cock under her fingers as she undid his belt with her other hand, unbuttoning and freeing it so that she could wrap her fingers around the full length of him.

Then he lifted her, his hands on her hips, up onto the tabletop, and pulled himself closer to her. She responded, wrapping her legs around his waist as her fingers eased aside the wet silk of her panties. She guided the moist head of his cock to rub against her clit, still tingling and pulsing, before she slid it lower to rest, achingly, against her pussy lips. She denied him entry, her hot, wet labia brushing, teasing him. Her hand wrapped around him stopped him from thrusting into her, despite his burning desire now to just fuck her hard and fast and unload his tight balls deep inside her. She kept him there, for just a few seconds that seemed like hours to him. She let him enjoy the wet kiss of her pussy lips on the moist tip of his cock, savoring the moment before she let his thickness disappear into her, before she let him become enclosed in the hot, wet embrace of her cunt. She was going to ride him to heaven and he was going to love every second of it.


Faberge Nostromo grew up in the East End of London before escaping to East Anglia. He has been a civil servant, a tea boy, sound engineer, a librarian and an IT consultant but always knew that he was a writer. He now lives deep in the heart of Suffolk with his wife, son and too many guitars.

My Thoughts:
The Prologue starts off in a way that I never expected - I had to actually go back and read it again because I wasn't sure that I had read it correctly.  Dan is relaxing at the bar after having a great time with some buddies.  He gets a really hot kiss from a stranger.  What a really hot way to start a book off.

Tomasz Burmeister owns a business called Trans-Action.  He's seen flirting with a customer named Danielle Danilova.  Danni seems a little nervous but Tomasz knows what he wants.  Even though they've just met there seems to be a real chemistry between the two of them.

Francine owns her own pastry shop.  Then he walks in and orders a latte.  He also asks for something special for a special someone.  For Francine, he's very dream worthy.  Faberge makes Francine very human by having her fantasizing about a stranger she just met.  How many of us do the same thing?  She also seems to have an issue with her significant other - he never seems to be around hardly at all.  His work seems to take up a lot of his time.

Tomasz and Danni are very sexual - make sure to have your fan handy because the scenes are really hot.  If you need some dream material, this book will have you set for weeks if not months.  This is not a book that you want anyone to read over your shoulder.

There is one song that seems to be a favorite.  If you grew up in the sixties, you will know who Peggy Lee is.  If you would like to see how she sings the song "Fever" you can check it out on YouTube, http://www.youtube.com/watch?v=s5Uw1lJ2C9U (this was done when she was on the Andy Williams show).

This book taught me something that I never knew before - what a Tgirl is.  Besides having a lot of great sex, Fabrege gives us a great story that plays like a movie in your mind.  It also has a very interesting ending.  It makes me want to go and catch a show at Trans-Action.  Then I got a surprise when I read the Biography.  I never realized how prejudiced I was about who writes the better erotica.  Fabrege has changed my mind.  I look forward to reading more of his work.